SORRY – THERE ARE CURRENTLY NO PHOTOS OF THE AURORA SKY, BECAUSE IT HAS NOT  YET BEEN BUILT

AURORA SKY is a hybrid Sky Guitar which bundles the powers of two completely different species of Sky Guitar into one! The idea is a variation of the prototype MIGHTY NEW DAWN which combined a nylon string guitar with a fully fledged electric Pegasus Sky. AURORA is set to combine a 12-string semi-acoustic guitar with a Pegasus Sky Guitar.

The guitar consists of two fully fledged independent Sky Guitars which share the same body, but have completely independent electronics and outputs.

The lower neck belongs to a Unicorn type 12-string Sky Guitar with 12 strings and piezos. The upper neck is that of a Pegasus type electric Sky Guitar like the Lionheart.
The body is mahogany and the 12-string upper half is hollow with a spruce top and Torres bracing. The lower electric half is solid mahogany, but has a maple top. The electronics are the same as in individual SGs. That means there is a Mega Wing III system installed for the electric Sky and a piezo based system for the semi-acoustic classical nylon Sky.

The 5 control knobs on the top scratch plate are for the 12-string Sky, whereas the 5 controls on the top are designated for the Mega Wing System. There is a 3-way toggle switch which allows for the choice of A) 12-string only – B) both guitars – C) Electric Pegasus Sky only 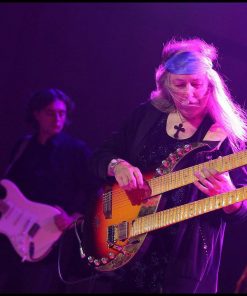 $42,000
By continuing to browse the site you are agreeing to our use of cookies.