My name is Charlie Travis and I am the proud owner of a Sky Guitar.
I first heard Scorpions while on road trips as a kid, Lonesome Crow. When I was a sophomore in High School, I was given a Scorpions Millennium Hits CD, and I wanted to explore more from there. So, I began my search starting from Fly to the Rainbow and I absolutely fell in love with the playing style of Uli Jon Roth. Next up was In Trance and songs such as Longing for Fire, Night Lights and Dark Lady opened my eyes even further with the guitar. Virgin Killer has always been my favorite Scorpions album, with Polar Nights taking my favorite song from that band. From there I wanted to try to play like Uli. It took me two months to get through the solo in the Sails of Charon in 2014 and I can still have noticeable mistakes. Uli was an instant role model for my guitar playing. His music kept getting better with Earthquake and Fire Wind (my personal favorite Electric Sun albums). Still So Many Lives Away, Chaplin and I, Burning Wheels Turning, Enola Gay etc.

I had seen Uli play live in Chicago for the first time in 2016 with my father and from there I knew that I wanted to purchase a Sky Guitar. It was something about seeing Uli play on the highest frets that made it impossible to wipe the smirk off my face. I met him for the first time that night after the show.

I worked two jobs trying to save money for my dream guitar. I have seen him live again in 2017 and met him after the show with my mother. I brought it to his attention that I’ve been wanting to buy a Sky Guitar, but didn’t know where to go about it. He was a massive help and from there, we started emailing about specification for how this guitar would be built.

On January 14, 2019 at 10:00am, I had received my own personal Sky Guitar just outside of Chicago. There is a big learning curve with this instrument, but I got used to it very quickly. I never played on a scalloped fretboard until this guitar and I absolutely love it. Getting up on the fretboard is so comfortable and you can get up there with such ease I couldn’t believe it. The LED fingerboard position markers are stunning too.

A big thank you to Uli and Boris for the wonderful craftsmanship, and for making an impossible dream come true at only 21 years of age.

With this guitar I’ll continue to write music and hope to get lucky enough to make it big someday. From there, I plan to have an investment for a second Sky Guitar. 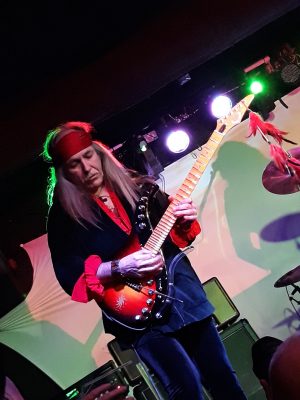 Recent Posts
Archives
By continuing to browse the site you are agreeing to our use of cookies.